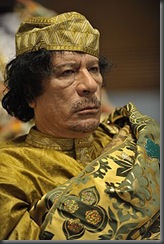 Western forces in Libya – no Arab involvement! No surprise there then eh?

Am I the only one who’s sick and tired of watching the world’s police waste tax payers money dealing with these “crises” only to be roundly turned upon by the permanently offended Arab world?

The politicians joyfully tell us, they’re there to protect innocent civilians!

There are thousands of innocent civilians caught up in war zones all over the world – these same politicians are aware of this, but they don’t get involved. Africa anyone?

Perhaps the Eurofighter needed to spread its wings?

The Saudi Air Force have Eurofighters too – they’re still playing around in their own wee bit of desert!

Perhaps the combination of oil under Libya and the loose cannon that is Gaddafi – in particular his involvement or otherwise in the murder of 270 on Pan Am flight 103 and in Lockerbie bring us closer to the real reason that the rebels/revolutionaries must be allowed to depose their mad leader – at whatever the cost to Europe’s workers.

I don’t doubt for a minute that there are more than a few both in London and in Washington who would love to see this skeleton be removed from the cupboard – at whatever the cost – by whatever means.