On Monday, 8th April, 2013 one of the most despised women in history died. Margaret Hilda Thatcher. 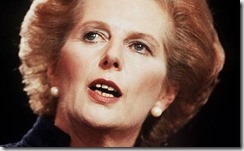 Carol and I cracked open a dusty bottle of champagne and toasted her demise. Incidentally, the bottle wasn’t the first, it had periodically been drunk and replaced over the years, but there always was a bottle awaiting that joyous day when she finally popped her clogs.

Since Thatcher’s death, there has been a sickening outpouring of manufactured grief at the “passing of this great lady” – not in my country. The BBC, that bastion of this ailing Union, has been particularly sickening it its one-sided commentary. They have unabashedly taken sycophancy and misreporting to previously unknown depths. However, regardless of the BBC and others indulging in the would-be Canonising of this woman, the reality is she was despised far and wide. Here in Scotland, in the formerly industrial north of England, in Wales and in Ireland, Republic and north, there was a great deal of celebration at news of her death. These were the lands that Thatcher raped and pillaged mercilessly. These are the communities torn apart by division and hatred and left, rotting and stagnant in her aloof wake. The industrial heartlands of industry, manufacturing, energy all reduced to the annals of history. The very soul of communities gone forever on the tails of her blue coat. 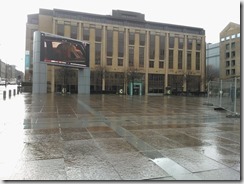 Some, admittedly, are uncomfortable speaking ill of the dead. Some would argue that she was aging and frail and, as such, deserving of “respect”. I don’t adhere to this redundant, medieval notion. The pages of history are littered with the memories of people who deserve nothing other than abject disgust – dead or alive!

So while London saw a number of people on her streets, some mourning, some celebrating, Edinburgh showed the ceremony on a big screen at the aptly named Festival Square. 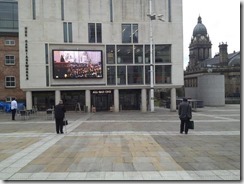 Leeds, did the same but with a much larger turnout.

Apart from the true-blue Tories, ignorant yet eager Americans and precious few others, Thatcher was a vile, foostie and evil woman who’s death brought no hint of grief but who’s legacy remains destructive and hated.