Me and my two-leg dad went up to the Lagoons today. It was warm and dry, just right for bounding around in the long grass.

We went the normal way, over to the river, then over the bridge, down to the big arrow and up onto the high country. That’s where my dad plays hide and seek with me. It’s my favourite game at that bit. And I sniffed, and I ran and I bounced and then I ran again. When I ran across the black ash, there were clouds of ash puffing up all around me – I liked doing that. It tasted funny though and my dad told me not to eat it. I eat mud but I get told off for it.

Then two dogs came along – they were big – I said hello but they were grumpy and wouldn’t play – so I ran and I sniffed. Then I ran again. No puddles – everything was dry, I was thirsty so I bounced in the long grass.

We came to the grass land – beside the tree where the dead fox lives. I ran in and out of the trees and did circles in the grass. New smells to sniff and noises made me bark. Dad said “be quiet”.

We went round all the trees and across the grass – it’s very long now and I have to jump just to see where dad is – but he’s never far away. Birds are everywhere but I can’t catch them. I keep trying then I run and I bounce then I run again. A dog passed here not long ago, I can smell it.

Dad said we’d go for a swim so we went along the long trees – there were things on the ground – I sniffed at them and barked – dad said it was a tent – there was no-one near it so I sniffed and barked. “Quiet you” said dad, he always says that though so I barked again.

We went down the hill. That’s where the water is. I like the water – it makes me cool and I have a drink. My dad throws in sticks and I get them back – it’s another of my favourite games. As we’re getting near water my dad says “here” so I go back to him. There are two-legs up near the slipway where I go in the water – quite a lot of two-legs and a lot of dogs. The dogs are all angry – I know by the way they bark. I bark but I’m not angry – then I see the two bad dogs – they’re very angry and the two-legs they’re with look dodgy. I look at dad and he winks at me – he says “here Muirne”, so I stay beside him. The two-legs with the nice dogs are arguing with the dodgy two-legs. The nice dogs are all angry that the bad dogs are there. The bad dogs want to attack but they’re on leads. They are furious – just because they always are. I don’t like them.

The bad dogs are on my slipway and the good dogs want to go in the water but they’re all just barking, and barking and the bad dogs are jumping on their leads.

I look at dad and he winks – I have the all clear – so I run right through the middle of them and into the water. It’s cool and refreshing and I drink up loads. I put my head under the water and look for fish – haven’t seen one here but I keep looking, Then I turn around and run back through the bad dogs and the good dogs to my dad – he points away from them all so I know I have to go wide. I run and when the dogs bark at me, I bark. One of the dodgy men looks at my dad and dad stares at him. The dodgy man looks away. I run. Dad tells me that the people with the good dogs are arguing with the dodgy men. I bark. Then I run. But we’re past them so dad nods and I run into the water again -it’s the stony bit – it’s not so good here but we go round where the digging hill is and it’s nicer there – I go into the water again and I look for sticks then I splash and I run through the water and it’s cold. I drink some more and dad whistles. I splash out of the water and we head for the little forest.

It’s dark in the forest, but there’s good mud to eat and sticks to play with. I smell all the dogs who’ve gone through here today and I run. I can still hear the dogs all barking and sometimes we hear men shouting. My dad says “out ye go” and I know that it’s ok to run so I run. I like the little forest and I like the sticks and I run.

We come out of the little forest and cross onto where the running horses race. We walk on. A two-leg man and a two-leg woman are coming. They have two dogs – I don’t know them. They come towards me and I wag my tail. They bark at me – grumpies – my dad whistles and I run to him. We go on. I run in big circles here and I jump up on dad. “Get down” he says. I run.

We cross the car road and onto the golfing park – I don’t know what golf is but dad says it’s for tossers. They have wee white balls but I’m not allowed to chase them so I run and I bounce then I run again.

We cross the golf park and head off up the dirt track back towards the water. I can swim again if we get there – and drink. I like that so I run ahead then I stop and run back to dad but he says “out ye go” so I run up ahead again. I meet a a big spaniel -he’s friendly so we play then dad whistles and I run. I see the big black flying birds – they’re on the ground so I chase them but they fly away – I can’t fly so I run.

As we’re getting near the water, dad says “here” so I run back and I look. He’s watching something so I run then I run back to him. It’s the dodgy men – and the bad dogs – they’re coming towards us. I look at dad. He smiles and winks. He stares at the men but they look away and turn off the path into the golfing park. Dad says, “out ye go” so I know it’s safe. I run in big circles and keep an eye on dad. He’s watching the dodgy men but they’re going the other way. I smell a dog that passed not long ago, dad whistles so I run.

A big brown dog and his two-leg come along – we’ve met before and he’s nice. His two-leg gives me a gravy bone and I jump up but I’m still wet and dad shouts “Muirne, down!”.

Me and the bog brown dog play. We do the running in circles game – it’s my favourite and I’m faster than the big dog but he likes the game to so we run and we go in circles and we run.

Dad whistles and I run to him. He speaks to the two-leg and waves then we leave. The dirt track. I smell dogs. Then I run. I do a peepee in the park and dad tells me I’m clever. Then I run and I bounce.

We go up the dirt track past the creaking trees where the bears might live and the forest is all around. There’s mud and I eat some then I bounce and I run up the hill and across the fence but dad isn’t coming so I run back to the dirt track and I run. We go right up the dirt track where the old lady was, she’s not there but her dogs have been here recently – I smell them and I run. There’s the fence, through the fence is the path up to the high country – we’ve already been up on the high country but dad nods so I run. Through the fence and up the hill. I stop and turn. Dad’s coming so I run. The grass is long here so I run in big circles – it’s my favourite game so I bounce and I run. I smell a dog then I run. Dad is up the hill so I run back to him. He nods so I run towards the creaking trees where the bears might live. I run in and out of the trees and dad says “good girl”. 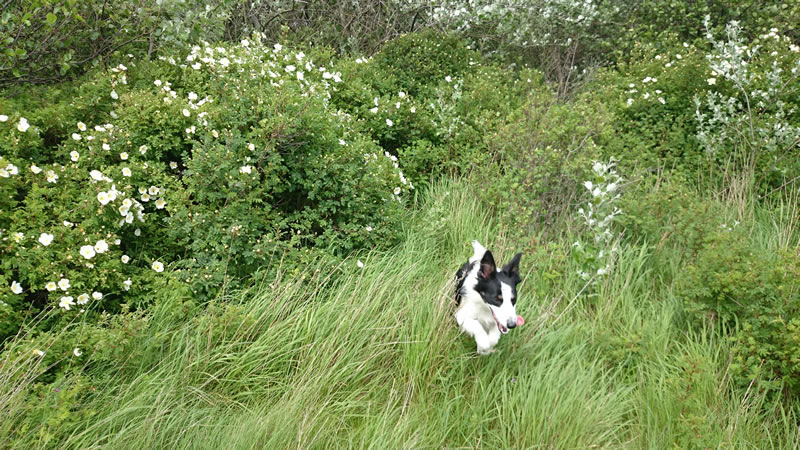 We play up in the long grass for ages and we go round all the trees and I chase the flying birds but I can’t fly so they get away. I run.

Back to the down the way hill and I do a poopoo in the park. Dad tells me I’m very clever then he puts the poo in a bag. Strange things two-legs but I run because I’m clever.

I get to go back to the water for another swim then back through the little forest but this time, at the fork in the path, we go right. That means we’re going home. I don’t mind because I’ve run and run and I’m tired but I smell a dog and bark. Then I run.

We go down the cycling path but dad doesn’t need to hold onto me because no bikes come along. We pass where the running horses meet but they’re somewhere else today so I run.

Dad puts me on the lead when we pass the BMX track. I like to go to the BMX track but I can’t ride a bike so I run. There are kids playing on their bikes but Dad says “come on” so I run on the lead and it pulls me back.

The river again and the flying birds are swimming – millions of them so I run and pull on my lead.

We cross the bridge and turn down past where I chased the pigeon. It’s not there today so I don’t chase it. A wee girl runs over – she’s called Abbie and she has a pink coat on. Dad says “say hello” so I try to jump up on her but dad says “get down”. Dad speaks to Abbie’s mum and dad and Abbie is allowed to clap me. She asks dad my name and what age I am. Then she asks if I’m a boy or a girl. Dad tells her everything then we go. Dad lets me off the lead and I run, I run to the half-pipe but there’s no one there. Sometimes, kids play there with their skateboards. I can skateboard because Aiden taught me how but he’s not here today so I run.

We get back to the park where I play with my ball and I talk to some dogs – they’re all good dogs and friendly, I remember the bad dogs from earlier and I bark. “Here”, says dad so  run up to him and I run.

I run to the puddle to have a drink but it’s gone – I don’t understand why sometimes it’s there then it’s gone. I run.

We get to the road and dad says “wait”. I sit. “Go on now” he says so I run to the door and I’m home from the lagoons where the dodgy men and the bad dogs were but it was great and I ran.

Mum is pleased to see me. I have a drink then I curl up. For the moment, I’ve no need to run.